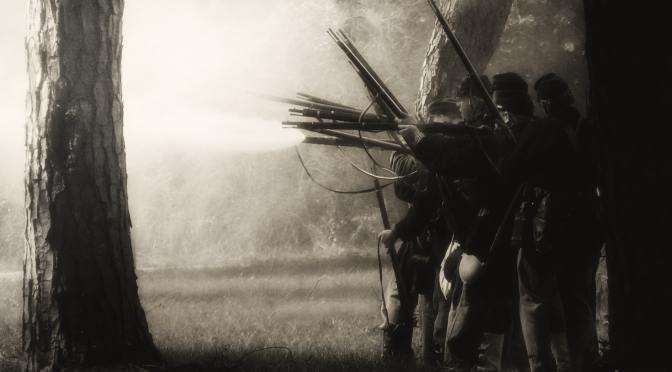 History is a tricky thing. Like the old adage, “can’t see the forest for the trees”, there’s a lot of different ways to look at large events depending on the motivations and beliefs of the people not just telling the story, but also the ones researching them.

Take the American Civil War, for instance. It’s a topic that we circle often on this site and on our podcast, mostly because it’s a lynchpin of American culture. The Civil War is one of the primary influences on the history of the United States. If the Revolutionary War is this country’s id, then World War II was our ego and the Civil War is its superego, and while we tend to deal with spirits of a more-or-less physical kind on this site, the ghosts and specters of the Civil War haunt us all in a very morally underpinning way.

I don’t want to get into ethical judgment or debate here, but in general, we look at the Civil War through a scope of ‘the South was performing human rights atrocities, and the North set out to stop them.’ That’s the broad “forest” view. But as anyone who has spent any time of social media will tell you, it is all too easy for a person, having ascribed themselves the virtue of “fighting evil”, to easily excuse themselves of horrific acts so long as they are against someone who represents that evil.

In the Civil War, the North was very much the “invading force”–Northern soldiers pushed into the South much more than the other way around, and the citizens of the South, we’ve found while digging up ghost stories and histories, have many horrific tales of Northern soldiers acting in less than gentlemanly ways as they marched southward. Those tales comprise a portion of “the trees” in our ongoing metaphor.

One such story we’ve come across involved the fact that Union soldiers marching across the South were given leave to raid and plunder the homes and farms they came across as they continued to push. They were given orders not to harm unarmed civilians, and to make sure that they left each family with enough food and supplies to survive, but beyond those meager boundaries they were free to ransack and steal as they desired.

In fairness, most soldiers only took liberties up to what their orders would allow, but this particular ghost story involves one group that decided to play by their own rules. This unit, under the command of one Colonel David Fanning, pillaged and plundered at will, leaving bodies, ashes, and destruction in their wake. The group quickly became known as Fanning’s Marauders.

One of the homes Fanning and his Marauders assaulted was that belonging to Confederate Colonel John Saunders and his wife, near Smithfield, North Carolina. Bloodthirsty Fanning looted everthing of value from the home, then killed the Saunders and razed their homestead to the ground, unknowingly sealing his own fate.

Col. Saunder’s son, Lieutenant John Saunders Jr., learned of the destruction of his home and the death of his parents and vowed revenge on the men who were responsible. The Confederate Army, knowing that Saunders was properly motivated to seek out such brigands, assigned him and his unit to the area near Smithfield and tasked them with the job of ferreting out guerilla fighters, bandits, and other individuals that chose to shy away from the front in lieu of taking advantage of the wartime chaos. The unit did their job as well as any group, but the operation’s time was running out and, to his chagrin, Saunders still hadn’t found his parents’ killer.

Finally, Saunders caught wind of a group of Union soldiers hiding out on an island in Hannah’s Creek Swamp in Johnston County. To scout it out, the Confederates borrowed some civilian clothes and rowed out to the small island under cover of night, hoping not to alert any lookouts the Yankees might have.

Before Fanning and his Marauders could realize what was happening, they found themselves surrounded by Confederates. Lt. Saunders ordered the camp and all the men be searched and took the liberty of searching Fanning himself. Saunders found a small gold crucifix around Fanning’s neck, a crucifix that he immediately recognized as belonging to his murdered mother. Rage instantly took over.

Holding Fanning at gunpoint, Saunders ordered all the Marauders hung right then and there on the island. Fanning was forced to sit and watch as his men had their necks stretched one-by-one. Then, rather than turning Fanning in as a captured soldier, Saunders marched him back to Smithfield, to the Saunders familial home. Saunders took Fanning to the large oak tree overlooking his parents’ newly lain headstones and hung Fanning there, his last moments spent looking upon those graves, the fruits of his hubris being burned into his eyes as the last image he carried to the great hereafter.

Today, visitors to Hannah’s Creek Swamp report random cold spots in the area and unexplained feelings of dread. Some have reported hearing the voices of men begging for their lives, while other hear the creak of branches, heavy with the weight of hanging bodies. Some witnesses even say they’ve seen the bodies themselves, as many as 50 hanging from the trees on a moonlit night.

Now, I’m not telling you this story to pass judgement on men who died over 100 years ago. But what I am interested in is how these stories affect people. We all know someone who will have a knee-jerk reaction to any mention of the Civil War, whichever slant to the congressional house that reaction might elicit. This is a reaction to what they have chose to see as the most poignant summary of the war. But that summary is always going to be a personal thing, and like all personal things, they are going to differ person-to-person, at bare minimum in the details, even if the broad strokes are a shared perspective.

For instance, the above story, near as my research can pull up, is completely fictitious. Research didn’t turn up any David Fannings from the Civil War. Likewise, research turns up John C.C. Saunders, John L. Saunders, John Sherman Saunders, and John Saunders Gooch, but none of them from Smithfield, North Carolina and none of them an obvious choice for the Saunders in the story.

So why would such a story take root and continue to be told over 150 years later, far outliving the men it purportedly is about? Perhaps the answer can be found in the interesting fact that there IS a David Fanning in military records, but a Fanning that fought in the Revolutionary War.

This David Fanning was an infamous Tory and British loyalist, siding with the Redcoats when war was declared. Given the rank of Colonel in the British Army, Fanning was well-known for his blood thirst and regularly killed men off the battlefield, and act soldiers on both sides largely considered dishonorable. When the war ended, Fanning’s atrocities were so numerous that he was one of only a handful of men that the state of North Carolina refused to pardon for their wartime activities. Now a wanted fugitive, Fanning was forced to evacuate to England with the rest of the British forces that departed Charlotte. Fanning stayed in England until he died, decades before the American Civil War even began.

So what happened here? Is this a case of bad record keeping? Was it a flat out lie? Something the locals in Smithfield and Johnston County use to excuse themselves from history’s judgment? Or something more?

Ignoring the haunting for a moment, I like to think that the story of Saunders extracting revenge on Fanning is a way for a state and its people to heal through the power of folklore. Redcoat David Fanning reeked serious damage on the people of North Carolina, both physically and mentally. He slaughtered people like a movie monster and then in the end, just…got away.

When we started The Booze + Spirits Podcast, a big belief guiding our ship was that stories are just as important and the truth, and in some cases more so. The tale of Saunders and Fanning, in my eyes, is a wonderful example of that ideal. People left wanting for justice and retribution, in this case the North Carolinians, created a fictionalized hero to defeat the fictionalized version of their villain. They created their own mythology, their own superhero, to put right things that were left unavenged, just as thousands of small communities had over human history.

By rewriting this legend, they determined their poignant summary. A myth of a hero defeating a villain, and a promise that justice still exists in the world and the fragile hope that keeps humanity from devolving into monsters raging against a cold uncaring universe gets to continue just a little bit longer.